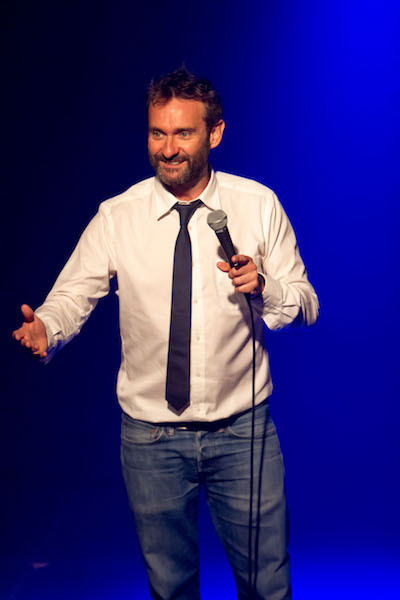 Gordon Southern presents as both a seasoned performer and a worldly man who provided comprehensive and gripping content whilst never skipping a beat with snappy punch lines and clever banter when engaging with the audience. That’s a Fun Fact! recaps the past 30 years or so of political hot topics and social behaviours complete with a contentious opinion delivered in an engaging, but also strangely educational, manner. As Gordon concisely quipped, “if you are not laughing, you are learning!”

From Trump, Brexit, Putin, the US’s adorable attempt at “democracy”, international relations, Cold Play, vegans (and, well, basically the entirety of the clusterf@#k that was the year 2016), nothing was safe from hilarious and thought-provoking scrutiny. It was also remarkably refreshing to hear such sensitive topics as divorce and the respective self-reassessment discussed with such brutal honesty (as much as can be expected from a comedian, anyway).

The premiere was likened to the “pre-season friendly matches” trialling early jokes, re-running classics and testing the overall chemistry. The Burt Memorial Hall as part of the church, complete with imposing stained glass murals, was an interesting choice of venue for such a show. It took all of 30 seconds for the blasphemous cracks to roll out (and the hilarity continued with the half-hearted apologies) which may be too much for some theists to bear and so viewer discretion is advised. It was to be expected given the disclaimer provided upon entry.

My only minor criticism was the external processing and decision-making on which jokes would be cut from, or would survive, to the next show which I found to be distracting. These would have been more appropriate as mental notes rather than running commentary which interrupted and detracted from the actual content. In saying this, such thorough reassessment and careful consideration to audience perception would more than likely ensure that each show will be better than the last, and so perhaps viewers could expect the best version of the show over its last few nights.

Gordon Southern has perfected the tough art of intelligent, provocative humour without being abrasive, vulgar or overtly offensive as so often happens when others attempt tackling controversial and otherwise dry subjects. Overall, the experience was a mix of eye-squinting pondering, anxious anticipation for the next word, or throwing my head back with deep belly cackles and laughing myself out of my chair. This is definitely a must-see for the perspicacious, or even if you’re looking for a change of pace in comedy.

This show is running until 4 February 2017, tickets are available through the Fringe World Festival website page available here. It is highly advised to purchase tickets sooner rather than later, as his last Australian tour was sold out.