WINNER! “The Skydiver and the Scarecrow (devised and co-written by Gordon)

Gordon Southern is British and happy to make fun of it. There are lots of hard things to swallow throughout history (mostly from 2016!) that we need to make fun of to get through the tough times.

Gordon Southern – That’s a Fun Fact is very novel in that it gives facts from only one year – 1989 that this comedian feels define this part of history. Southern recounts that he previously did a show about the history of human civilisation and ending at 1989 because after the fall of the Berlin Wall a famous journalist said it is now the end of history. This thoughtful performer disagrees with this statement and gives his reasons why. Southern uses a musical sound effect to highlight throughout this historical journey when it is a fun fact and this keeps the night light and amusing. He knows with a crowd of a varying ages that some facts will have more relevance but outlines early that we can add input about different historical moments ourselves.

Southern starts off by acknowledging his environment being in a church and makes some solid jokes about it. This comic introduces himself well, explaining his background and the show’s premise smoothly. Sometimes Southern interacts with the crowd (mostly by reading reactions,) getting to know why some react the way they do and then making material about it, on the spot with quickness and energy.

Gordon Southern – That’s a Fun Fact is a uniquely conceptual show that is interesting and guaranteed to make you laugh…you never know, you just might learn something, too. 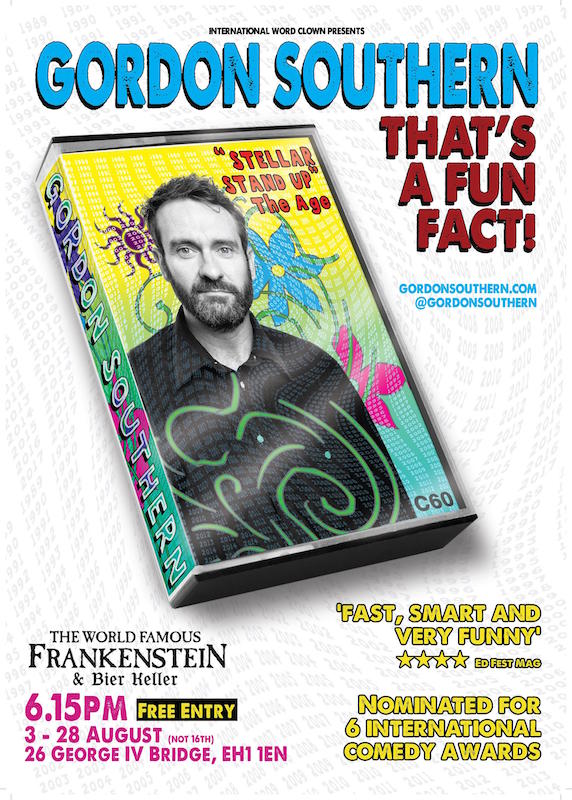