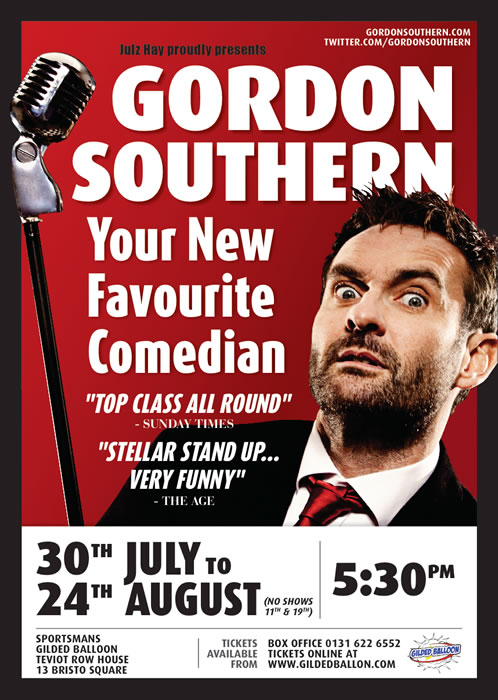 EDINBURGH 2014: “Your New Favourite Comedian  is fast-paced, feel-good comedy at its best. Southern’s seasoned comedic chops coupled with his undeniable skill as an entertainer make for a solid hour of comedy that is wildly entertaining and endlessly funny. ” ★★★★★ – BROADWAY BABY 7-8-14

“Gordon is a clown without make up who works his audience with an expert example of how stand up should be delivered.  The creative hub of Australia love him, His audience loved him,You will love him too. This is the show to start the evening, a pre-dinner cocktail of mirth. ” ★★★★ – THE MUMBLE 7-8-14

“Comedy that hits you right between the eyes… It’s no surprise he has accolades piling up like some comedy war hero. He’s a great act.” Dominion Post. NZ May 2014

“Gordon Southern is honest, energetic, and a great storyteller.  And the title just might be true: he is awfully close to becoming my new favourite comedian.” NZ Theatreview – 15th May 2014

Press For Your New Favourite Comedian